Monero(XMR), a prominent privacy token, has risen by 9% over the past 24 hours. For most cryptocurrencies, it’s a green day— also privacy-based tokens like Monero (XMR), a private, safe, and anonymous cryptocurrency released on April 18, 2014. The price today is $50.46, as of when composing. It has an estimated circulating supply of 17.5 million coins and a total traded volume of $174,339,953, ranked among other cryptocurrencies as number 12. Bullish momentum rocks XMR/USD driving price past $50 after prior declines early Thursday while reclaiming strength. Recently, the most significant improvements have been introduced in the Tor and I2P anonymous network operations. These are both privacy controls that operate beyond the Internet.

*Monero (XMR), the leading privacy coin, has grown 9 percent in the last 24 hours
*Bullish momentum rocks XMR/USD, pushing price past $50
*A recent update has been introduced into operations on anonymous Tor and I2P networks. 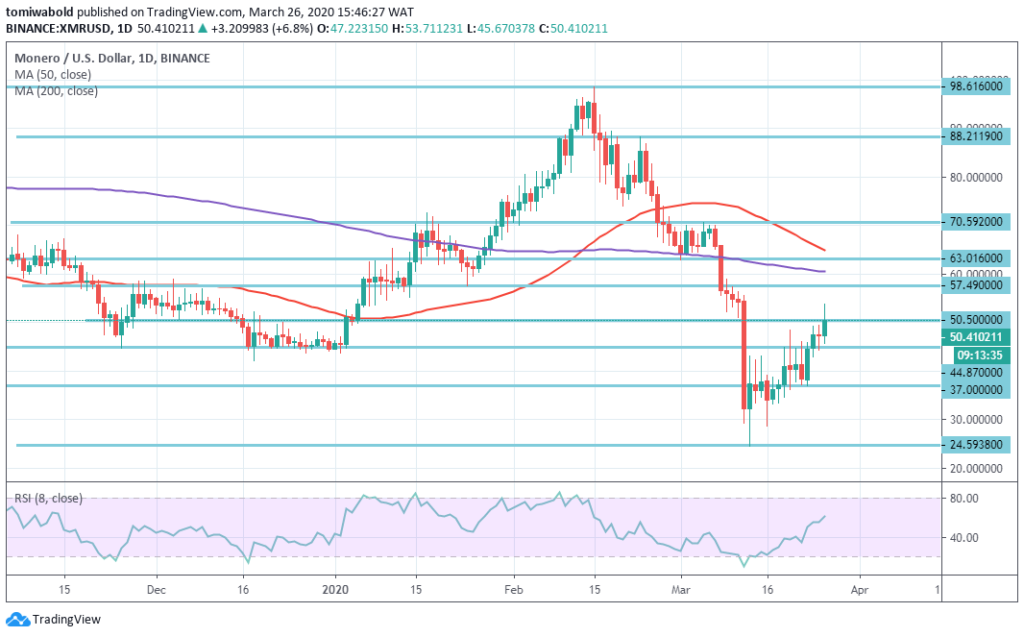 XMR/USD bulls have reclaimed momentum this Thursday as the price went past $50 level. It managed to break through the near term horizontal line of resistance in the process. The bulls would require breaking beyond the 200 MA and the next level of the horizontal barrier at $57.4 level to maintain the upward momentum.

The 200-day moving average slope has constricted, suggesting a rising variability in prices while the regular RSI is trending to overbought level, and the 50 MA is suggesting a decreasing bullish momentum. Although Monero’s price still has to maintain its level in March 2019, when it was beyond the $50 level, Monero reaches as high as $98 level in February, before coronavirus started ratcheting through the market. On March 13, it reached a low of about $24 level and its risen more than $26 to trade at $50.46 level. 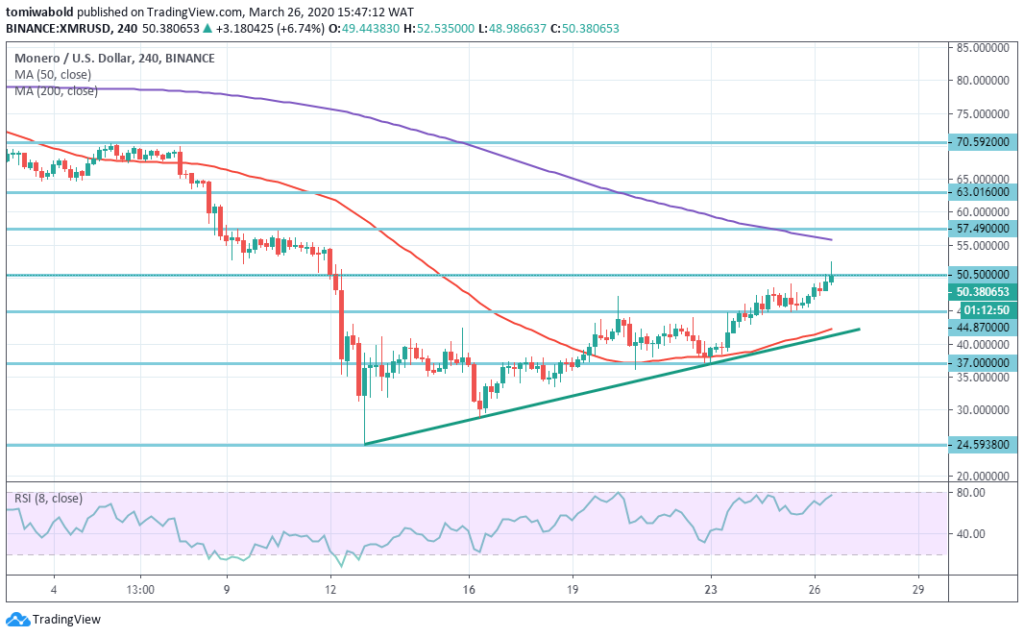 Even as Monero trades below its high of $98 in February, the token is consolidating its position on the 4-hour time frame quite a lot. It is one of the few optimistic charts, as it still makes higher lows and higher highs steadily. The next big challenge for the pair is to leave the $50.00 level behind, there doesn’t seem to be enough momentum to advance from the psychological zone at the moment.

Staring at the indicators on the chart, both the 50 MA and the supporting trendline suggest a steady upward movement is above the level. The RSI has already crossed the borderline overbought and that is one valid point. The volume even shows improvements but the big surges come from the start of the sell-off when the price gained support at the levels of $37/$24. In the meantime, the token is aiming to consolidate its positions beyond the level of $50 as downside risk looks obvious.

This content is synced from the rightful owners. Copyright on text and images belong to the original source.

--
This article was first published on: Latest Crypto News